Ustad Bahauddin Dagar is a torchbearer of the Dagarvani Dhrupad, known for its patient, meditative approach. He is the world’s leading master of the rudra veena (‘roaring veena’), still considered by many to be the king of Indian instruments. Though rare today, its even, austere tone remains linked with a certain universal purity, close to the essence of Indian classical.

Some trace the Dagar family lineage back to master musicians of the 16th century, and Bahauddin first studied under his father Ustad Zia Mohiuddin Dagar. He describes the relationship:

“His method of teaching was subtle and mysterious...he would give a student a few key phrases that captured its soul. Then he would ask him to work on them till the spirit of the raga revealed itself. And, we did find that once we had mastered the key to a raga, the whole raga opened itself up effortlessly when we sat down to play.”

Bahauddin’s musical style is marked by an unobtrusive eloquence, and he regularly performs with no accompaniment, harking back to a pre-technological age when musicians played longer and slower. But he also draws creative energy from Dhrupad’s status as a living form - it may be India’s oldest surviving style of classical music, but many consider it to be the most highly evolved by virtue of this.

He seeks to represent his tradition as a full person, with a reputation for high-quality teaching across the global veena community. In his words, “each instrument has its own pace of life. A beenkar must never be in a hurry”.

"Once the veena is tuned in keeping with the chosen raga’s features, there is no going back. The microtones start issuing orders. I am neither a religious person, nor an atheist, but I have seen this happening. Veena demands total surrender." 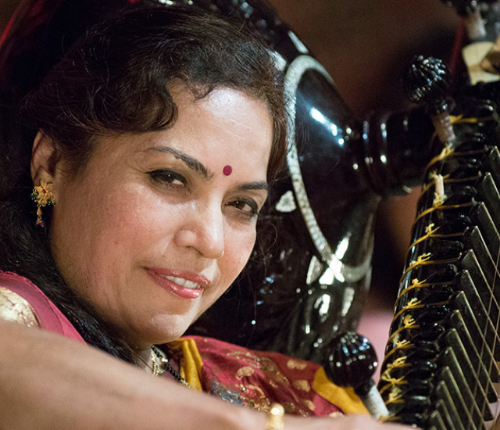 Jyoti Hegde is among the world’s leading rudra veena players. Sitar was her first love, and she studied the...