Darbar Festival brings Indian classical music into the realm of virtual reality. We see VR as a way of bringing global listeners closer to the art form’s ultimate roots...

What is Darbar's VR360 Festival?

Put simply, Virtual Reality technology allows you to put on ‘goggles’ which simulate an interactive, three-dimensional world around you. Darbar Festival 360 will teleport its viewers halfway across the world, dropping them in picturesque locations next to India’s temples, mountains, and lakeside sunsets. They will find themselves sitting invisibly in front of some of the Subcontinent’s finest musicians, as the sole ‘audience member’ for a special private raga performance.

The experience is interactive and immersive too, aiming to recreate in the feeling of ‘being there’ in fine sensory detail. The sounds - including singers, sitars, and passing birds - will respond as you turn your head, enabled by cutting-edge ‘ambisonic’ microphones that record in all directions at once. Viewers can admire the breathtaking landscapes stretching in every direction, perhaps turning to look out across the surrounding valley to appreciate the meditative space in the music.

This makes for a lineup of unusual variety and depth, the likes of which could rarely be seen at any ‘physical’ festival. Khayal vocal superstar Kaushiki Chakraborty sings Bhairavi, the 'queen of ragas', at sunrise, while Ustad Bahauddin Dagar explores Dhrupad's patient movements on the rudra veena, considered by many to be India's 'king instrument'.

South Indian venu flute pioneer Shashank Subramanyan has been captured in full flow on Carnatic ragas including Ranjani and Saramati, and Hindustani sitar innovator Purbayan Chatterjee plays the auspicious Mian Ki Todi alongside romantic ghazal compositions. Shashank and Purbayan also join forces for special North-South jugalbandi duets of Kirwani and Charukeshi (the latter of which translates as ‘one with beautiful hair’).

Shashank Subramanyam, Purbayan Chatterjee, and Parupalli S Phalgun
The programme, which will be free to all from Dec 25th onwards, mixes established stars with up-and-coming artists. Also appearing are renowned vocalists Manjiri Asanare-Kelkar, Manjusha Patil, and Pelva Naik, virtuoso sitarists Anupama Bhagwat and Ayan Sengupta, and a plethora of others - Pandit Rupak Kulkarni on the bansuri bamboo flute, Abhishek Borkar and Pratik Shrivastava on the 23-string sarod, and master percussionists Debjit Patitundi and Parupalli Phalgun. (See full list at the end.)

Indian classical music has always been a set of living traditions, evolving along with changing times and audiences. So perhaps it is no surprise that its leading artists seem eager to adopt these new technologies. Far from being stuck in some imagined technophobic past, many of them have embraced any new chance to bring their ancient-rooted music to modern listeners.

Sandeep Virdee, Darbar's Artistic Director, acknowledges that even the best concert hall has limitations when it comes to recreating the magic of such an interconnected art form: “Indian classical music seeks to engage the whole attention of the listener, drawing them into the calming, meditative worlds of raga and tala [rhythm]. So it’s only natural that we should turn to new technology such as VR, as it can give a far more immersive, all-around experience.”

We gave visitors to the Barbican Centre a taste of VR last month, setting up a ‘360 room’ as part of our music festival. We noted a range of fascinating and overwhelmingly positive reactions, with listeners describing simultaneous feelings of being calmed, stimulated, and intrigued at this new method of musical appreciation.

Far from being some technoid attempt to electrify India’s famously acoustic music, we see VR as a way of bringing global listeners closer to the art form’s ultimate roots in the natural world. Many North Indian ragas are intimately tied to particular hours, seasons, and natural phenomena - Ahir Bhairav is associated with the sunrise, and Raag Basant is inseparable from the ceremonies of springtime. Some musical descriptors even derive directly from natural phenomena (such as pipilika yati, translating as ‘the movement of an ant’ - ancient rhythmic form characterised by zig-zags and sudden tempo changes).

Ragas are improvised for the exact time and place of performance - and so the beauty of the surroundings will feed into the flow of the music. Young sarod star Debasmita Bhattacharya recalls a recent visit to a great valley: "It was so vast, so open, and I couldn’t help but take my sarod out...at these times it feels like nature is summoning you to play, like the environment is drawing the music out of you...The sound of the birds, the feel of the breeze at night, and the smell of the soil after rain - they all help you to play certain ragas".

In fact, Indian music's connection with the cycles of nature is so great that many musicians shy away from performing ragas at anything other than their prescribed hour (known as prahar). According to vocalist Manjusha Patil, who sings for the Festival, “After the sun rises...Raag Lalit doesn’t sound good to us. Why is this? Because the rays of sunshine are getting hot. At this hour, only Raag Sarang sounds nice...the notes merge into nature.”

I asked bansuri master Pandit Rupak Kulkarni to reflect on these deep biological connections: "The ancient ragas are based on our body clock. In the morning, the mood is divine and fresh, so the ragas are mostly played in middle and upper octaves. The sun is rising, so we look upwards and pray, hence, these ragas are mostly uttarang pradhan [upper-octave dominant]".

"One raag I recorded for the 360 project - Malay Marutam - is from Carnatic music, which does not give so much attention to the times of day. We North Indian musicians have decided to designate it as a morning raag, mainly due to the nature and essence of its notes, which are very close to our morning Raag Ahir Bhairav":

Such time-bound sentiments mean that Western concertgoers, with their evening schedules, are often treated to a plethora of ‘sunset’ ragas, while missing out on the fuller spectrum. Our recent music programme at the Barbican Centre featured late morning, mid-afternoon, and various evening raga sessions, but hosting a successful ‘6am prahar’ concert would be challenging even under much laxer licencing laws than London venues already face.

Sandeep recognises these limitations. “At the closing concert of this year’s festival, we persuaded [santoor pioneer] Pandit Shivkumar Sharma and [sitarist] Pandit Budhaditya Mukherjee to play midnight ragas in an evening session. But this is rare, and they discussed their nerves about it on stage”.

The Festival will make a fuller range of ragas available to a broader audience, allowing viewers to choose whichever ragas suit their time of day. In Sandeep’s words:

“This may be the first time many global listeners get to immersively experience a morning raga in the morning. With 360, they will literally be hearing Bhairavi in a new light”.

VR can open things up across geographical space as well as time. “It would be excellent to run concerts around the world, but we’re only a small team, and our annual festival takes place in London. Of course not everyone can get there - while we have hundreds of videos on our YouTube and the Darbar Player, nothing brings the music to life for a global audience like this can. We wanted listeners to be able to experience 360 for free.”

“Children in particular seemed to love it, marvelling at the new textures and rhythms and peering in all directions. We had one very young brother and sister who were looking all around and waving their hands. They didn’t want to give their headsets back...and so their mum said it might be a fantastic way to keep them non-messily occupied during the school holidays.”

What about the wider picture for VR?

The Festival’s Christmas Day launch date was chosen to chime with new technological trends, with more families lined up to unwrap VR headsets from under the tree than ever before. VR is, by many estimates, the fastest-growing sector across the whole of the UK’s entertainment and media industries, with 2020 revenues projected to reach over eight times their 2016 level. And the pull will only become stronger as the technology advances - all our videos have been captured with cutting-edge equipment in vivid 8K definition.

Its uses go far beyond just entertainment too. For those who are mobility-limited, VR technology can bring profound feelings of freedom and connection. Those who are bedbound are increasingly turning to headsets to experience some of the joys of the outside world, or to interact with distant family members whom they cannot visit in person. Royal Trinity Hospice in London partnered with a VR firm last year, simulating the great natural wonders of the world in detail for terminally ill patients who could no longer hope to travel to them.

And a recent study by Japan’s National Cancer Hospital concluded that VR-based talking therapy effectively helps homebound sufferers of the disease to relax, boosting the endocrine and immune system and slowing its onset. Raga music, already heralded for its therapeutic powers, has yet to be tested in this precise context. But perhaps this can change now (any open-minded medical researchers - please get in touch with us!).

All that is required to ‘attend’ the festival is a smartphone and a basic holder for it - you can get foldable, cardboard ‘eye-holders’ that will fit any smartphone for less than £5 online, and can also make them at home for free. Although a dedicated VR headset, such as the Oculus Go (£200), will greatly enhance the overall experience. And of course, the videos will be a fantastic watch on 'normal' YouTube too - you can drag the screen around, or just relax into the music and scenery. 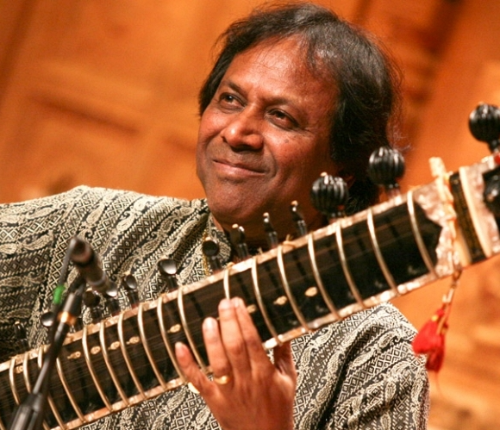 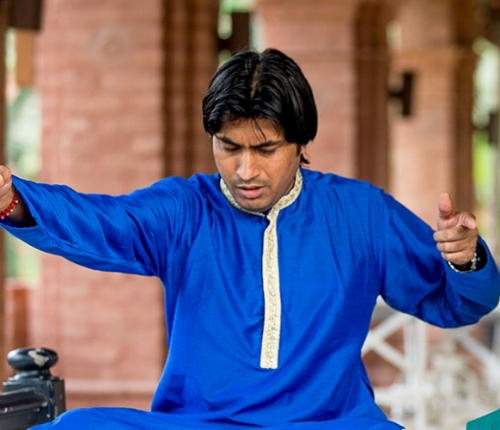 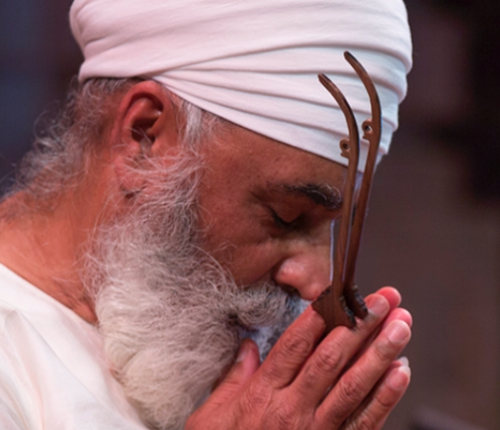