The honeyed voice probes through static on my phone, dripping with a politeness it doesn’t need to adorn.

His name needs no introduction; in fact, even the acronym will do. RFAK—Rahat Fateh Ali Khan. The qawwal steeped in six centuries of tradition, Sufi pop star, Bollywood sensation and first Pakistani to perform at a Nobel Peace Prize concert. That Rahat.

Ustad Rahat Fateh Ali Khan’s prolific life and critical acclaim have not been obscured from the public eye. Much has been said about his journey into devotional music, starting as young as the age of three, and his ascent to fame, controversially, in the shadow of his uncle, Nusrat Fateh Ali Khan. Today, we hear Khan’s insight about the Sufi tradition, and what the vehicle of qawwali (Muslim devotional music, with the Arabic root word qaul meaning to speak and therefore spread the Sufi message of universal love and compassion) means to him.

Read on to learn about the heart of qawwali, through one of the most illustrious qawwals alive today.

Note: This interview was conducted by Aysha Imtiaz and has been repurposed and retrofitted for better flow, clarity and cohesiveness. The conversation has also been translated from Urdu.

I can trace my spiritual lineage back six centuries. Sama—a form of worship through listening in Sufism—goes all the way back to the Sufi Saint Khawaja Moinuddin Chishti (1143–1236 CE), from the Chishti Order (the Chishti order is a Sunni Sufi order resplendent in its reputation for love, tolerance and inclusivity).

Known as the oldest gharana related to khayal, which stems from the Persian and Arabic word for imagination, the style is distinct in its romantic poetry and ornamental ragas, stressing love as a means of conceptualising the creator.)

Teaching those children the poetry he wrote for his pir, Hazrat Amir Khusrau helped actualise the genre of qawwali because it was in their voice that his poetry was delivered; I’m a direct descendant of that gharana, so you can see how it’s embedded in our lineage.

It takes nonpareil dedication, actually. I’d always had that passion and interest in qawwali, I’d wake up early in the morning to do gaiki (to sign from a score without seeing it before). At first, when I was really little, I didn’t know the names of the raags, I just knew they sounded divine or, as they say in Punjabi, “bhalli changi” (very good).

With time, I started learning the names, the boundaries, the parameters of our craft. Early morning riyaz is important, very early, like at Suhoor. Then there’s evening riyaz. But you know, sleeping is also very important. These days, sometimes you see people staying awake till the wee hours of the morning, right until the ideal time for riyaz starts. But if you sleep for five to eight hours and do your practice right after waking up, the throat muscles are soft and pliant. Getting those muscles into practice in a relaxed state helps immensely. That’s how your voice is strengthened and how it becomes robust.

What else does productive riyaz entail?

There’s also intense discipline involved. You could be practising for five to eight hours, and building up vocal and physical stamina is important.

How long does one spend?

As long as you can make it. Like Muhammad Ali, the iconic boxer, said, “I don't count my sit-ups; I only start counting when it starts hurting because they’re the only ones that count.”

It’s like an intense workout. That last rep is where you see growth and how you build your stamina in small increments by powering through for progressively longer intervals—five more minutes this time, ten the next—even when you’re tired.

What do you feel the essence of qawwali is? How would you try to put it into words?

Qawwali is a message, a universal message of love. I feel the concept predates our religion, from the times of ancient Vedic bhajan and kirtan, because it’s devotional music. It has always been devotional music. With the advent of Islam, there was evolution and qawwali became one message about one Allah. Like Bulleh Shah wrote, “Bulleya! Ki jana mei kon?” (Bulleya! To me I am not known.) We come into this world by the grace of Allah, and we try our best to navigate through it and find ourselves—our identity—with soch and fikar (deep meditative thought), but who are we, really?

Our love unites us. You could translate Jalāl ad-Dīn Mohammad Rūmī, or other devotional poetry in any language: it will all converge with this central message of love. The Sufi message of universal love.

And what is the spiritual importance of qawwali in Sufism? Could you talk about the intersection?

For the Sufi, the qawwal is like an imam (a spiritual leader who leads the prayer). Qawwali is a way for us to worship. Just like the rules and ethos surrounding Allah’s worship are written in the Holy Quran, Sufi kalam carries the message for spirituality. Historically, it signals a paradigm-shift. The pervasive early spread of Islam is marked distinctly by this compassionate and inclusive approach. Widespread conversion in those days wasn’t perpetuated by brute force, but through modeling and imbibing tender values of spirituality—by living them, by welcoming others. Essentially, we’re propagating the teachings of the Holy Prophet (s.a.w), and the Sufi message...as if we’ve brought him, as the best role model, to the podium of the mehfil (gathering). That historically gentle and mindful demeanour lulled so many into embracing Islam, be it through the poetry of Rumi or Dr. Allama Iqbal. And that’s also always been the message of qawwali.

How are things changing now?

With our increasingly fast-paced lifestyles, feeling frustrated is part of the zeitgeist of our times. There’s this time famine marked by scarcity, even as we’re surrounded by abundance. Being in a constant state of flux—and feeling pressed for time or resources—seems to be the only constant. But instead of coursing through life fluidly, we’re living in fits and starts.

All around me, I see such prevalent dissatisfaction and frustration. Instead of philosophical fikr, we’re caught up in the materialistic and capitalistic worries of everyday life.

Those who have two cars now need four, those with businesses are stressed, students are overtaxed with academics and they don’t have the time to devote to learning the craft. As a result, legacy planning, even with my own students, is difficult. Because they’re talented, but they just don’t have the time to fully immerse themselves anymore. And what can you say to them, really? They can’t abandon their bread and butter. It’s getting a lot more difficult to survive.

And how does that impact the genre?

The purity of our artform is tainted, almost, by commercial demands and ‘marketability’. If you don’t evolve to fit the unique needs of this perennially pressed-for-time genre, you won’t be able to keep up. This break-neck speed of life is denigrating the genre, splaying the true essence in helter-skelter directions.

It’s all fraught with this constant tension, you see. On one hand, you have a deep desire to continue to pay homage to the mysticism and legacy bequeathed upon you, and leave behind a pure devotional artform for your successors. But on the other hand, there’s the inevitable need to evolve and condense it into more widely accepted ‘packages’ or ‘slots’.

While we do take a stand sometimes, there are constraints and time slots governing our performance. And you either evolve to suit the confines that have been imposed or fade quietly into oblivion.

If it were up to us as qawwals, we’d have uninterrupted, blissfully drawn out two to three hour sessions of qawwali. To condense the hours-long essence of fervent love for the creator into three minute slots dilutes the passion, and how can it be distilled to your listener without the framework and progression that a longer piece affords? We need to evoke that feeling, the purity of sentiment and the listener’s devotion. It’s a process imperative to understand, and without the context, framework and luxury of conjuring up an imaginative world by unraveling and threading together layer upon layer in your music, can you really achieve the same effect?

That’s a tall order for even the greatest of ustads, unless they have a magic wand. Simply put, I’d say it’s like getting a purebred Arabic racehorse and getting him to race in the sweltering heat of Multan.

What message do you have for those trying to understand the nuances of qawwali?

See, that’s the thing with the way we mire simple constructs in needless complexity. Allah knows and judges our actions on the basis of our intentions—let me share an example.

And legend has it, the day when Hazrat Bilal didn’t make the call to prayer, the sun was held back.* It was Hazrat Bilal’s intention and sentiment that mattered. We seem to obsess over a theologically saturated discourse—that the shalwar need not graze the ankles, or the hands must be folded a certain way.

My Allah sees the morality and intention behind our acts, not ritualistic practices. With qawwali, too, it’s more than a set of rules or a rigid checklist of expectations. It’s that feeling of oneness with God and the love we have for Him which we utter through kalam.

What is your favorite kalam, and why?

I’ll leave you with a small excerpt from my favourite kalam, but one that has a profound message written by Hazrat Shah Hussain. “Man Atkeya Beparwah De Nal, Us Deen Duni De Shah De Nal.” (My soul is entangled with the indifferent one, Lord of all things visible and invisible).

When your heart is connected and in sync with the Creator of all creation, you think he doesn’t care. But if I am His and He is me, then Him caring for me would be...selfish, almost. So what more could you want than that connection? 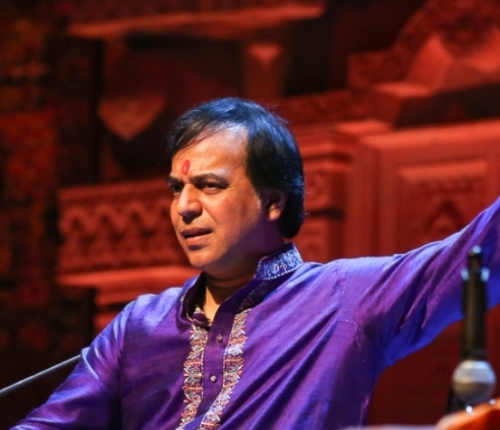 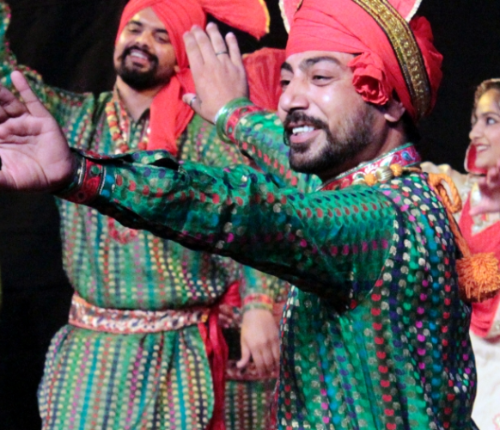 An Introduction to Indian Folk Traditions: some important genres

As early as 400 BC, Indian musical treatises had drawn a clear distinction between marga sangeet (music for the gods)... Read More 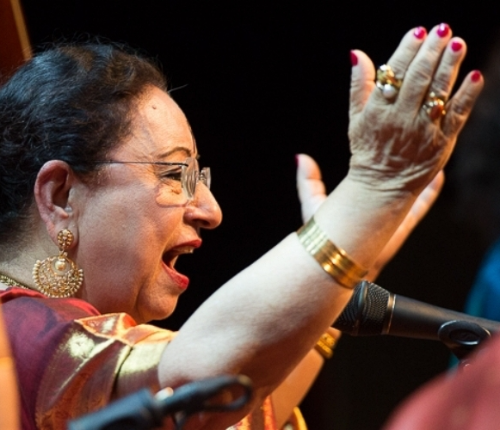 Begum Parveen Sultana interview: ‘Each raga is a mirror of all...

The Patiala khayal superstar discusses her unique cultural heritage, the power of physical expression, and how to... Read More