The mother of all North Indian drums, the pakhawaj is also known as the mridang, the generic word for any barrel-shaped drum. A two-headed drum descended from the much older South Indian mridangam, it produces a deeper, more resonant tone than the more popular tabla. The pakhawaj was originally made of clay but now it is more commonly made of wood, with two parchment heads each tuned to a different pitch. It is tuned, like the tabla, by knocking the wooden side-blocks into place. A tuning hammer is also used to alter the pitch on the treble side of the drum.

The pakhawaj is the usual percussive accompaniment for Dhrupad music, including whether vocal, veena or the bass sitar known as surbahar - as its low, mellow tone and rich harmonics are ideally suited to pure, less heavily ornamented classical styles. It was also used for the accompaniment of the rabaab, a predecessor of the sarod.

It is played by being placed on a cushion in front of the percussionist who usually sits cross-legged and plays the treble head (which looks almost identical to the tabla), with the dominant hand. This head is covered with a paste of boiled rice, manganese dust or iron filings mixed with tamarind juice. The larger bass side is covered with a paste of wheat flour. Unlike the tabla, these paste centres have to be stripped and reapplied, freshly, for each performance.

It is this coverage, the application of which is an art in itself that gives the pakhawaj bass an exceptionally rich and resonant texture. The pakhawaj bass-side is played using the whole palm of the hand as opposed to just using the fingers but the treble face of the drum is hit using different fingers and strokes to produce different sounds. As with the tabla, pakhawaj rhythms are also identified by syllables known as bols. 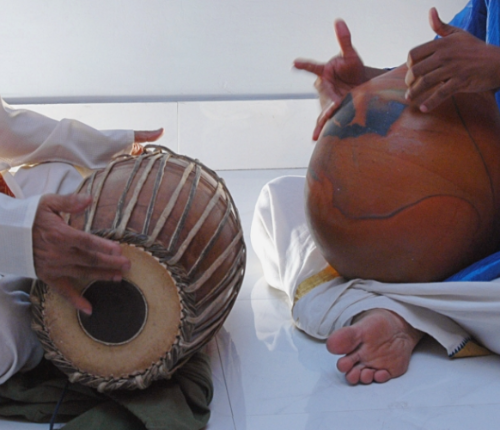 The ghatam is a South Indian drum resembling a porous earthenware or clay pot, a common household object in North and... Read More 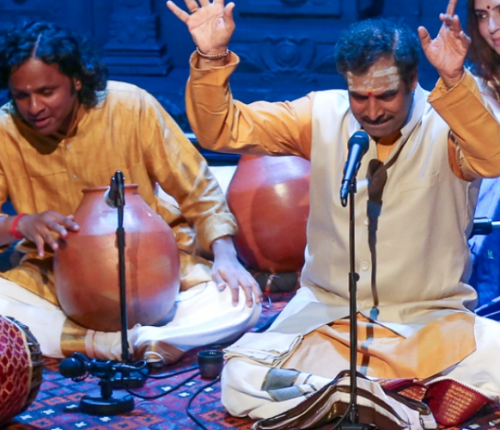 Performance format for Carnatic concerts: sections of a kutcheri

The present-day format of Carnatic music performance is thought to have grown out of the tremendous flowering,... Read More 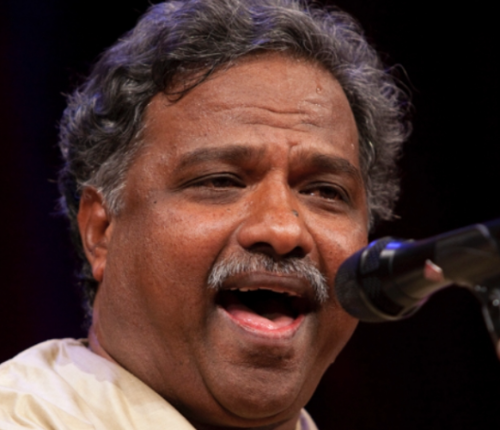