Exploring Raag Malkauns: 'He who wears serpents like garlands'

Breaking down the origins and shapes of Raag Malkauns, an auspicious form with dark, divine origins.

Raag Malkauns is often said to evoke a state of severe tranquility. Hear how Pandit Nikhil Banerjee’s sitar opens an austere realm of contemplation - the mood is mournful yet always stable, as if finding resolution whilst meditating on some great loss. Its five-note scale is simple, but there is no other raga like it.

Famously auspicious, Hindu legend tells that the raga was composed to soothe the rage of Lord Shiva, the god of destruction. Born into royalty, the princess Sati had renounced the material world in honour of Shiva, who she soon married. This displeased her father, the King, who insulted her and berated Shiva’s character. Sati eventually became consumed her anger, taking on the form of the supreme goddess Adi Parashakti. Storms broke, and her mortal body burst into flames, unable to contain the power of the goddess.

Shiva was distraught when he learned of his wife’s death. He flew into a wild rage, placing Sati’s charred corpse on his shoulders and throwing two locks of his hair to the ground. They sprung up to form the two Manibhadra, many-armed warrior spirits who wielded swords, tridents, and cleavers in their quest for vengeance. Shiva became lost in an unending tandav dance of destruction, and the band roamed the globe, decapitating the king and slaughtering his entourage.

Shiva’s fury disturbed his fellow gods, who implored Lord Vishnu, the preserver, to help. Vishnu brought Sati’s spirit back to earth, reincarnating her as Parvati, the goddess of devotion. Parvati sought out Shiva, purifying herself by meditating naked in the harsh outdoors and eventually finding him in the forest.

It is said that Parvati first sung the raga as they wandered in the mountains, naming it Mal-Kaushik ('he who wears serpents like garlands’) after a prominent depiction of Shiva. The music calmed his mind, succeeding where all else had failed. Soon after the couple became husband and wife. Shiva took mercy on his vanquished foes, resurrecting those who had been slain and even reinstating the king to his throne (although he replaced his severed head with that of a goat).

Historians theorise that the raga may have been named through some possible combination of Malavas, an ancient Punjabi tribe, and kaisiki, a microtonal variant of the note ni (the 7th scale degree). But either way, Malkauns is inseparable from its darkly mythic reputation. Many musicians still fear its supernatural powers.

“If you’re not in a serious mood, then don’t play or sing Malkauns. You must take extra care with this raag. It is a favourite raag of the djinns [spirits], you see. If you can charm them - if they like the way you are playing it - they will do anything for you. If they don’t they will kill you”.

The performer must remain patient, finding a balance that will keep the Pandora’s box closed. The devil should not be found in the detail. And spare a thought for superstitious performers - I get nervous on stage sometimes, but at least feel that missing a modulation won’t curse the audience.

It provokes all manner of reactions. Spiritual healers cite its ability to relieve headaches and stomach pain. Others have reportedly used it to conduct curious experiments on farm animals (“The cows in their shelters listened to Malkauns, but did not give extra milk. However, the animals became more active...”).

Perhaps the cows’ large ears were piqued by Malkauns’ structural simplicity. Or perhaps not. Either way, the underlying scale harks back to nature, drawing on prehistoric forms - namely, the pentatonic scale. This culturally transcendent musical shape has been independently discovered by virtually every civilisation, and underpins genres from American blues and Indonesian gamelan to Japanese classical and West African folk. Mammoth-tusk flutes from 40,000 years ago are tuned to the scale. Even non-musicians intuitively know how it goes.

Malkauns is tantalisingly close to the reassuring sounds of the pentatonic. It differs by raising a single tone (Pa to dha - 5th to b6th), but this new note radically reshapes its balance. It introduces a searching uncertainty to the scale’s core, playing with our expectations. Our minds feel an almost-familiarity, as if we are grasping at something that always remains just out of reach.

Soloists often focus on mandra saptak (lower octave), elaborating long lines in vilambit laya (slow tempo). All five tones are used to start and end melodies on, bringing a tense, inescapable balance. You are pulled in all directions at once, suspended between all points of the scale, contemplating the world from a distance. The raga has comparatively few rules, but nonetheless is regarded as one of the hardest to master.

Pandit Shivkumar Sharma introduced the santoor to Hindustani classical music. He hails from the Himalayan border city of Jammu, and has customised his instrument to capture the icy textures of the surrounding mountains. Hear how he uses its cold shimmer to jump fragments of melody up through Malkauns’ scale, with wide leaps and defined spaces between the notes. It has a fine-lens focus and an architectural solidity, perhaps akin to staring at the crisp detail of a glacier across the valley. There is a steady, unforgiving beauty, as if humbled by the power of some great natural process.

It is a deceptive raga, balancing structural simplicity with unfamiliar tension. Traditionally it is associated with veeram (‘the essence of courage’), a quality imbued with acceptance, determination, and the absence of infatuation. If there is heroism here then it is that of the post-battlefield return to camp, filled with relief, longing, and mourning. Musicians describe Malkauns solemnly, as if they must sacrifice part of themselves to fully learn it.

The gods of its origin myth were renowned for their severe feats of self-discipline, renouncing civilisation and withdrawing to nature. So to some, the raga is a call towards ascetic isolation. But to others, the mythic signifiers point the other way. After all, Parvati used it to ground Shiva’s mind, helping him to re-engage with reality rather than to continue running from his grief.

These disparate figures may at first glance seem to have little in common, but they all share an immediate contact with some other realm, bridging two worlds with a charged stillness. Dedicated musicians know this feeling - we often traverse mundane life reluctantly, half-locked in abstract internal worlds of rhythm and melody.

Maybe Malkauns has a particular pull for musical obsessives. After all, many have become lost in it. Khayal vocal greats such as Pandit Bhimsen Joshi and Ustad Amir Khan often placed it at the centre of their repertoire, and Kirana gharana exponent Pandit Pran Nath spent a lifetime working on it. He retreated to live in mountain caves for years at a time, singing to the birds and drawing inspiration from the sounds of water. His ascetic routines even resemble the tales of Shiva and Parvati in the forest.

Malkauns is sometimes said to be most at home when sung rather than played. But instrumentalists have made it their own too - Pandit Nikhil Banerjee’s sitar (featured above), Ustad Sultan Khan’s bowed sarangi, Pandit Hariprasad Chaurasia’s bansuri flute, and Ustad Amjad Ali Khan’s sliding sarod to name a few. Sangeeta Shankar’s violin brings a warmer approach, a little reminiscent of Hindolam, the its Carnatic equivalent.

It retains its distinctive essence even in non-classical settings. Mohammed Rafi’s famous rendition of Man Tarapat Hari Darashan Ko places it in a filmi context, as does Asha Bhosle’s Rang Raliyan. In 1968 Shankar-Jaishankar featured it on their landmark Raga Jazz Style, writing a melody that would be picked up by Sarathy Korwar’s Upaj Collective a half-century later in London. Don Cherry’s intriguing free jazz rendition wanders further from the original mood.

Whatever the setting, Malkauns draws the listener away from impulse and delusion towards a suspended realm of contemplation. It balances tranquility with severity, calming Shiva’s dance of destruction and turning him to reflect on the suffering he had caused. It is unique in its ambiguities, and continues to captivate modern listeners. 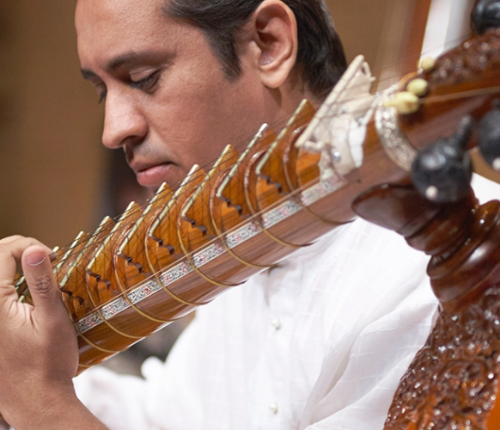 The veena, also known as the been in North Indian languages, is a large plucked lute. It is undoubtedly one of... Read More 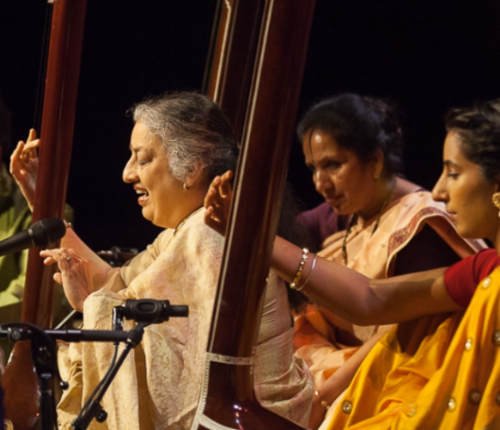 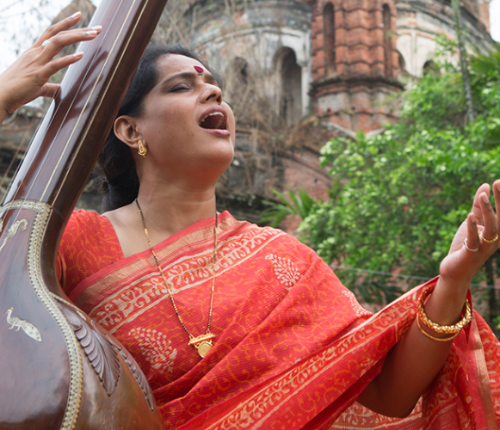